Viva Androgyny: what is the sex of unisex?

Being ‘different’ and ‘original’ is still being part of the system, if not even more so, these days. Such popular figures as Lady Gaga are perpetuating the system and while some cultural critics celebrate Gaga as a contemporary shift of feminism, it nonetheless brings a question if that is a kind of shift we are happy to see and if it is not another face of capitalism disguised as a mixture of hype fashion and scandal.
To me Gaga seems a complete embodiment of the age of ‘post-everything’, in which we are now living. Everything is a commodity, everything is to be sold, bought, measured by its monetary value or the illusion of a lifestyle it promotes. While 80s were famous for the fact that being subversive was ‘in fashion’, now it seems to me that the popular idea is that there are no boundaries whatsoever. Is it possible to be subversive in the age where gay lifestyle is hype, cross-dressing is cool (as long as you are a model, designer or a fashion-conscious city dweller, otherwise it is still pretty much a crime), mixing and matching is our style? The illusion of resistance is yet another promise of the Western capitalist culture. Rigid institutions that hold the society together in the all-too-familiar way are still difficult and dangerous to threaten. Take the institution of gender, for example. We are still clearly marked as male or female even if our appearance suggests (or, rather, screams in the language of fashion) that we are something else. Therefore, the question arises, is unisex a valid alternative to the gender binary we are all tied to, or is it yet another trick of fashion marketing which will leave us penniless and still hungry?
High street fashion and her majesty high fashion itself keep playing with the idea of ‘femininity’, ‘masculinity’ and sex-gender unity itself. Now even French Connection claims to know what makes a man and a woman. Their new 2010 Fall/Winter campaign screams ‘This is a man. This is a woman’.

And, being a joke as it is, there is nonetheless a hidden element of structure in fashion marketing – you aim at a certain audience, certain victims, you catch them all, you cash in. Scientific tone and clear boundaries that may be ridiculed here are still going strong underneath the gift wrap in our consumerist dreams. There is only so much you can choose guided by a deterministic tone – there is a man, if you are a man, you buy these clothes. Then there is a woman, if you happen to be a woman, you buy those clothes. Only two categories – nice and easy. But what happens if you don’t fall into either of those categories? Then you go to another shop, which will offer you an alternative, a choice of a different identity. You can then be unisex, or at least that is the promise. But can you really be unisex in a highly gendered world? Can you jump on the wall that divides two binary opposites and declare, “I’m above you all!”? In reality, probably not.


Take another example of gender bending and blending techniques now used by fashion industry to attract the rebellious souls. Burberry 2010 fall/winter campaign surprised with a selection of models that seemed like each others’ clones. A female model (second left) looks especially androgynous and perfectly fills the space ‘in-between’. 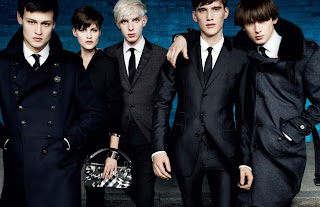 Now, luckily, you can look a little like a boy even if you are a girl, and still be acceptable. Or, shall we say, if you are a successful model, you then can be a girl who looks a little like a boy…? No doubt, however, that it is much easier now than it was years ago. So all for the better, right?
A different figure to fit in-between and provide a link between maleness and ‘feminine’ looks is surprisingly found in H&M 2010 fall/winter collection. The long haired male model represents a missing link between clearly male (macho) and ‘feminine’ looks, such as (and again I am quoting French Connection here) the wind playing with the hair.

(This is the only picture I managed to find portraying the H&M 2010/11 fal/winter male model with long hair-behind the manequins)
Versace pushes it forward with their fall/winter 2010/11 campaign and puts two male models in a relatively ‘feminine’ poses and, again, long hair does the trick. 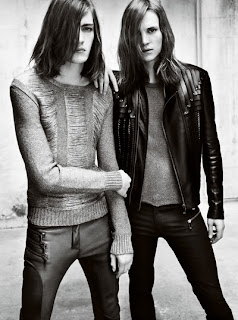 More from Versace fall/winter 2010/11
However, while it is aimed at the more androgynous male look, maleness is nonetheless evident and one is not very likely to question the gender of both models. It is not easy to put one’s finger on it – there is something that reassures one of gender category the models belong in both Versace and Burberry cases. It would be a lot more subversive if we saw girls advertising boys’ clothing, and women’s collections advertised by men. That is possibly next year’s aim – we will see where the fashion train goes. It is not very likely to change its direction easily though.

Either way, does unisex exist in the real world, or is it just a fashion game? We can clearly see unisex  as a new brand: hair, clothes, perfume, shoes (trainers – universal unisex shoes!) and the list goes on. Ultimate androgynous clothes, such as shirts, trousers, shorts, trouser-suits, are now easily available and celebrated by fashion industry. Even more so, it has spread to other branches of culture industry, such as film, music video, photography (although they are all closely related to fashion). The example of the smell, or shall we say, the heavenly aroma of unisex illustrates how the idea of unisex is used as a trick to reel in new customers, those who have not yet been reachable for exclusively female or exclusively male brands and products. CK ‘One’ is clearly marketed for androgynous urban consumer chasing the illusion of ‘otherness’. 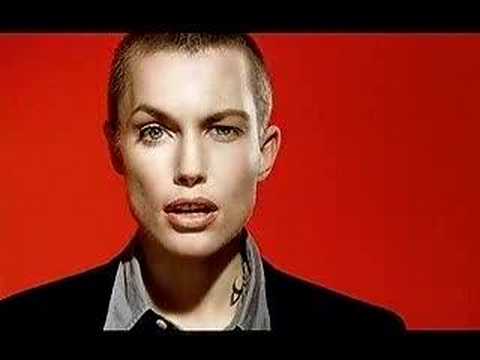 
Looking at it with the eyes wide open, androgynous very often shouts ‘maleness’. Androgynous look is mostly male-dominant – it is not likely to be a skirt or a dress. Female-to-male transition (not necessarily in terms of sex reassignment, we are using more of a metaphor here) is more integrated in fashion than male-to-female. The popularity of ‘boyfriend’ jeans (you don’t have to have a boyfriend to wear that kind of jeans, you can buy them in the high street store and fool everyone!) and ‘boyfriend’ watches and other ‘boyfriend’ fashion items proves the point. And while gender bending men’s fashion collections of 2010/11 propose skirt-trousers for men, it still seems that ‘maleness’ in women’s fashion blends in easier. It probably has something to do with the play of the contrast – a thin female model wearing her ‘boyfriend’ jeans emphasises her femininity, especially matching those oversized jeans with tight top and high-heels.

Either way, despite harsh critiques of consumerist society with all its vice, despite the arguments that cultural industry caters for everyone (and clearly no one seems to escape), it nonetheless seems that the culture as it is today still provides secret doors and dark alleys, which we can walk (at our own risk) and step out of the clearly marked category of gender. Even if it is a scam, if it is just another way to reach us, we should still be happy to have this opportunity to get a pair of trainers, or a haircut, or a perfume that does not have a label ‘M’ or ‘F’. We have enough of this in every other aspect of our everyday lives. What we are going to do with this label-free illusion – that is entirely up to us and that is a question to be raised again and again. Even if we have reached the era where the labels ‘F’ and ‘M’ are being replaced by fashion labels, it nonetheless leaves the population labelled. While there is definitely a shift, it is the shift of the name of the label, but not the abolition of the label itself. Looking at it from this perspective, there is still a LONG way to go.
24.10.2010 er
Posted by Sugalvojau. at 3:17 PM